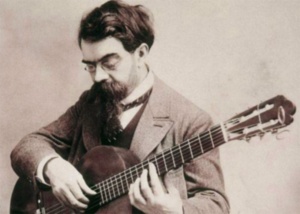 Possibly the most contentious claim and source of heated debate in the nails/no-nails issue, is that of Francisco Tárrega’s [1852 – 1909] change in 1902 from playing with nails, to playing without. There are two opposing camps: artistic choice versus medical necessity.

Champion of the former is one-time student of Tárrega, Emilio Pujol, whose biography of his teacher is not exactly dispassionate or balanced. Here is an extended excerpt from his biography, showing the relevant passages:

“XI –CHANGE OF DIRECTION Tárrega did not appear in public again until June, 1902. During some months of apparent inactivity and spurred by a constant and keen desire for self-improvement, he had withdrawn into seclusion to resolve a problem that had been tormenting him for a long time. He wished to do so without having to meet the public’s demands…

“Tárrega’s sensitive ears had adapted to the sounds of the orchestra, the string quartet and the cushioned hammer of the piano. His forays in the great name of Art were to give him nuances of expression which were not found due to his personal esthetic in an uneven, metallic and sharp timbre. Above all, he was repelled by the duration of sound in the forte, especially in the chords. His dream was to capture the light homogeneity of the string quartet, which is a synthesis of the orchestral polyphony, whose reduction to just one expressive concept was his highest ambition.

“On many occasions, the accidental loss of a nail had let him hear the mellowness obtained without the nail plucking a string. But the movement of the finger in this case needed another touch, another movement and another force. This would be difficult to do without laborious preparation, which would have to erase from his subconscious his acquired habits and touch, so that the new stroke could be used with equal ease…

“Little-by-little he lessoned the surface of the nail that protrudes beyond the fingertips of his right hand, more-and-more trying to avoid the influence of the nail on the sound. Step-by-step he was arriving to the point where he was eliminating the nail completely. This process required a new procedure and led to a complete change of plucking. By not using the nail, he consequently improved his touch and expressive action. As previously his touch had focused on the point between the nail and flesh, now the focus is the sensitive fleshy part of the fingertip. The fingertip, depending on the nail’s hardness, lacked the necessary ability to hit the string with the correct resistance, and its softness yielded in a vain effort to get the desired strength and clarity. The fingertip alone could avoid the nail. It was therefore necessary that the fingertip be hardened through constant practice so that without the hardness of the nail, it would pluck the string with just the right softness needed to produce a full, strong and vibrant sound.

“And Tárrega worked diligently, studying and working, searching and improving his new technique. He spoke of these efforts to people he trusted, those he believed capable of understanding and giving an opinion on such a delicate matter. Only after many months did he decide to give his first concert using his new original method of plucking. It was in June, 1902 in the Quatre Gats Hall in Barcelona.

“My father knew my love of music and guitar and wanted to give me a treat during a long convalescence from a serious illness. He tried to find the best teacher available. My father’s generosity touched me deeply since in his heart of hearts he had a poor opinion of the guitar considered it unworthy of true artistic expression.

“My brother Juan Antonio, who was responsible for my enthusiasm for the guitar, accompanied my father and I on an April afternoon in 1902 to the Artist’s house on Valencia Street. I will never be able to forget the impression of that visit…

“When my father explained the reason for our visit, Tárrega asked about my studies in general. Putting one of his guitars in my hands, he asked me to play anything so he could judge my ability like a singer’s voice is tested. I had learned to play in my own way, with God’s help, several simple passages of Aguado and Sor, Cano’s La Despedida, a clever work with languid glissandos, the Maestro’s Capricho Árabe and some other works which had (unfortunately for them) fallen into my sinful hands. I had hardly begun to play when the Maestro, with a kind smile, interrupted me saying:

” “All Right; no more of this. Let’s start by forgetting it and placing your hands right. The first thing you have to watch out for is the sound.”

“And taking a file out of one of his pockets, he handed it to me saying: “You’d better file those nails . . .”

“And that’s the way those classes I had wanted so much began, continuing sporadically until his death.”

I’d like to contrast that with Domingo Prat’s entry on Tárrega, in his “A Biographical, Bibliographical, Historical, Critical Dictionary of Guitars (Related Instruments, Guitarists)”, but the book is a) expensive, and b) in Spanish, which I don’t read. However, my understanding is that Prat claims that Tárrega suffered from a hardening of the arteries, which in turn had a deleterious  effect on his nails, rendering them useless. In short, flesh-only playing was forced upon Tárrega.

We do know that Tárrega subsequently went on to tour Italy (his programs included tremolo pieces), and that he encouraged other students to cut off their nails. And I can’t help coming to the conclusion that, no matter how he came to playing without nails, and once he had made the necessary adjustments, he certainly thought it an improvement.

One needs to keep in mind Pujol’s statement that, “This process required a new procedure and led to a complete change of plucking.” You can’t just cut your nails off and play the same way you have always played. I would say it takes a couple of years for the finger pads to get conditioned to their new role.

Did Tárrega sound the same with or without nails? I doubt it. Sadly reports of his playing do not make the comparison, though they do continue to eulogise over his performances. He continued to compose new music – we know that Endecha and Oremus come from this post-nails period. And we know that he encouraged his students to follow him, and ditch the nails.

Assuming the fairly recent emergence of a wax cylinder, thought by some to be a performance by Tárrega of his composition Maria – Gavota, is NOT Tárrega (I don’t know, one way or the other) then the best we can do is listen to his protege, Josefina Robledo, who studied with him from the age of 12 until he died nearly five years later. He called her, “my little disciple”, and it is thought she came closest to playing like her teacher, especially in the first piece she played to him: Capricho Arabe: 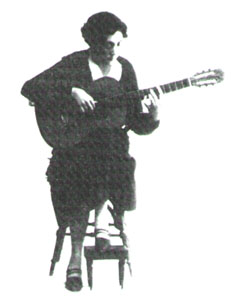