It’s amazing how some music written 100 years ago can still sound avant-garde today. Therefore my 21st century is a LONG century, looking backwards over the last 50 years or so, while being very much caught up in the present too. As for the future, that music has still to be written.

Many guitarists still struggle with complex time signatures, changes of time signatures, complex harmonies, angular melodies, and complex rhythms – all commonplace features in “modern” music. One of the best aids is the Guitar Cosmos series by Reginald Smith Brindle – highly recommended – and you will see some of his pieces from these books and other editions below. Published by Schott Editions.

I also recommend The Vanguard Guitar – Etudes and Exercises for the Study of Contemporary Music, by Colin McAllister, and published by d’OZ. I intend to record some items from this book in due course.

Another wonderful, but very hard to find, book is An Introduction To Serial Composition for Guitarists, by Denis ApIvor. Contact me if you cannot find this book elsewhere.

I also recommend the compositions by Belgian composer, Gilbert Isbin, whose work has traces of classical, jazz, and world musics, with his own appealing voice. Gilbert is currently writing a series Intervallic Compositions for intermediate level, which will open up ears to intervals often heard in modern music. He also has advanced concert items. More details of his publications on his website.

I am happy to take on students to study the above-mentioned books. Details on my Skype page.

So, first of all, Reginald Smith Brindle:

Reginald Smith Brindle wrote the Guitarcosmos series (published by Schott) and longer works such Polifemo de Oro, recorded by Julian Bream and others. 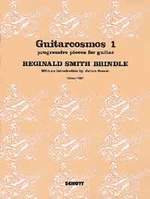 The studies contained in Volume 1 of Guitarcosmos are very varied. As the composer states in the introduction: ‘There is tonal music, and atonal music, pieces using whole-tone and pentatonic scales, modal music, bitonality, serial techniques and music in the style of free dissonance’.

Here are a number of items from Volume 1:

The first piece he seems to have written for the guitar is the beautiful Nocturne:

And from Volume 2 of the Cosmos, the divinely beautiful, De Angelis:

Finally, the beautiful portrait of his composition teacher, Luigi Dallapiccola

Here is an homage to Reginald, called Brindle. It was written by Gilbert Isbin, who features below:

An Introduction To Serial Composition for Guitarists, by Denis ApIvor

This book is a gem. It not only teaches how to write serial music, but includes ten solos, in two groups of five, which are masterly. These pieces are advanced. So far I have only recorded one item on video, but thoroughly intend to record more.

Here are three of a projected series of six Intervallic Compositions, by Gilbert Isbin. The first features the Major 7th and the #5:

The second features the perfect 4th and perfect 5th:

The third features the Major 2nd and minor 3rd:

Such restrictions are an excellent compositional exercise for would-be composers, and also good ear-openers for performers, yet Isbin still manages to mould poetic miniatures out of them.

Here’s one of Isbin’s longer works, A New Day’s Dawning – unfortunately I did not set the mic up properly before making the recording, so it’s not my usual standard. But the piece is excellent:

Another more advanced piece, and I think one of Gilbert’s best, Above All:

Compositions Dedicated To Me

I can’t tell you how honoured I am that these fine composers have dedicated compositions to me, and am delighted that each one is a gem.

Gordon Ferries [ https://gordonferries.com ] is a guitarist/lutenist/composer based in Edinburgh. We have been friends for many years, and I have always admired his playing. I urge you to check out his CDs and website. For a few years now, Gordon has been presenting his own compositions in concerts, all song cycles for soprano and guitar.  I was  knocked out when he dedicated one to me. As I do not work with a singer at present, I asked Gordon if I could extract the Prelude to Eros Dante, and by way of adding a couple of repeats, present it as a guitar solo. Thankfully he agreed, and here it is:

Christian Vasseur [ https://christianvasseur.weebly.com ] is one of the most interesting performer/composers in Europe today. His music for either lute or guitar is composed, as he says, “without dogma,” sometimes soft, sometimes hard, always beautiful.

Now, this is a fun piece to play. It involves cutting up the first page into small squares, with an instruction on each. Then shuffle them into a random order before playing – this ensures that the performance will be different each time.

“Skärv consists of shards, splinters and fragments that may, or may not fit together. It describes a melancholy, pessimistic (even destructive) view of the music as remnants of something abandoned and unintelligible.”

A Day With A Colleague, by John Purser

John Purser originally wrote this as part of a four-movement suite for lute. I have arranged the second movement for the guitar.

From the composer: “This is a tribute to my father-in-law, Elliot Forbes, who was Professor of Music at Harvard University. His initials form the upper line of a strict but affectionate two-part canon on EFBEs – Elliot Forbes = E F Bb Eb.” http://JohnPurser.net