Granted, the theorbo is not a classical guitar, but being sometimes a single-strung lute it could be argued it is closer to the guitar than a regular baroque lute, and much closer than a baroque guitar.

The theorbo was created when baroque music was born, sometime circa 1580, when a supportive bass formed one panel of a triptych of bass, harmony and melody, and the lute was required to develop its lower register.

Before wound strings were created in the mid to late 17th-century (not becoming common until the 18th century), gut strings were used on lutes at all pitches. If the string length remained the same, the bass strings would have to become thicker, dangerously so, and eventually they would lose any musical worth. So, someone decided to increase the length of the bass strings, allowing them to be thinner, and more sonorous. Hence the long string length of the lower strings.

It seems to have been created as an accompaniment instrument, Caccini’s songs being an exemplar. Here is Caccini’s most famous song, “Amarilli, mia bella”. The theorbist would be expected to play the indicated bass notes, and improvise chords and runs based on the figured numbers above the bass notes.

Early theorbos seemed to have been bass lutes, to which an extension had been added to house the longer bass strings. Interestingly, an Italian, Angelo Notari, published in England a book of Italian monody, but with an English introduction, which became popular and influential. Although the theorbo part was a bass line, a manuscript survives in his hand with theorbo tablature accompaniments for a 10c theorbo in A.

Ten courses for a theorbo is unusual. Kapsberger’s first book of solos for theorbo is for an 11c instrument with the first two strings down an octave. Here is a picture of an 11c theorbo in action from around 1600:

Soon odd fellows started writing solo music for the 14c instrument, some of it very advanced, imaginative and virtuosic, among them Alessandro Piccinini, Girolamo Kapsberger, and later in France, Robert de Visée.

My theorbo – by Jiri Cepelak

I bought this second or third-hand in 2017. Jiri Cepelak (website) lives in the Czech Republic, and is one of the finest luthiers in Europe.

This is a small theorbo, with string lengths of 70cms and 120cms. As such it is more likely to be used for the solo repertoire.

The pitch should be D for the first string, the longer theorbos being a 4th lower at A. However, this theorbo was used for accompaniment in a baroque ensemble, and was tuned to A. To achieve this, modern strings had to be used, with nylon trebles, and bass strings similar to classical guitar strings with a nylon silk core, covered in silver wire.

But theorbos were always strung with gut, and this is how I now have it, thanks to the excellent strings by Damian Dlugolecki of http://damianstrings.com

I have it tuned at D to a pitch of 392, suitable for French baroque music – at 440 pitch that gives a equivalent of C for the first string.

One of the defining details of a theorbo is that the highest string is the 3rd, with the 1st and 2nd strings being tuned an octave lower (otherwise they would break).

I recorded a number of videos before I strung it in gut. These videos are at the incorrect pitch for a theorbo of this size, but the sound with modern strings is big and impressive, not a million miles away from the sound of a large theorbo in A. Further down this page you will find videos with gut strings at the correct pitch for this string length – the difference in sound is remarkable. It would be nice to have a switch to easily shift between the two!

First up is an NTD (New Theorbo Day!)…including a performance of a Romanesca by Piccinini…

Next up are two pieces by Bellerofonte Castaldi (1580 – 1649), poet, composer, and inventor of the tiorbino, tuned an octave higher than a large theorbo in A. 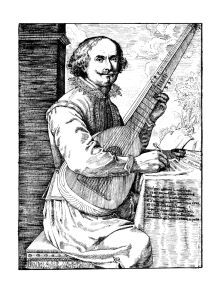 Judging from the illustrations in his Capprici, Castaldi seemed to play a small theorbo, not dissimilar in size to my own. There are some who question the accuracy of this drawing, but I am willing to give the inventor of the tiorbino the benefit of the doubt.

Talking of odd, another big name in the theorbo world is that of Girolamo Kapsberger, an Italian known as Il Tedesco. You will find many performances of his unique music on youtube. Here’s a Passacaglia in Dm, followed by variations on a ground bass in his own name, followed by a second video of some quite odd, but very wonderful pieces.

The theorbo in France also came in two basic guises: large and small. The large version was used at l’Opera and at Versaille. The smaller theorbe de pièces was reserved for solo playing in a small chamber. The number one composer is without question the great Robert de Visée.

Most of de Visée’s theorbo music can be found in one manuscript, belonging to Vaudry de Saizenay. Much of it is difficult to play, but well worth persevering with. Here’s his beautiful allemande, La Royalle:

New music is being written for the theorbo. Here are some pieces by the Ukrainian-born New Yorker, Roman Turovsky, beautiful works which are available free from his website.

Finally, here begin the videos made with the same theorbo strung in gut, a fourth higher in pitch, more suitable for a theorbo of this size. The sound is radically different.

Some 20 years ago I had published a book of arrangements for theorbo of the first three cello suites of Bach. Here is the Bourée from the 3rd suite, complete with a spoken introduction.

Alessandro Piccinini wrote some wonderful theorbo music – one piece has already featured in the first video above. Here is his take on a “l’Alemana”

You might have heard the song, as it is featured in the French film, Tous Les Matins du Monde”

To sum up, the theorbo came in many shapes and sizes, at many pitches, and ranging from 10 courses to 19! It was principally used for song accompaniment, though is often used by soloists today.