Some guitars that have passed my way… 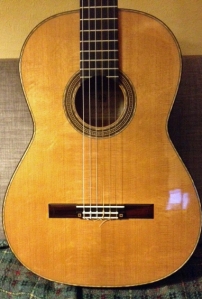 Simon originally made this guitar for himself. We both have an interest in cypress-backed guitars, not least because Torres, Manuel Ramirez, Santos Hernandez and other makers made them. Today, cypress is associated with flamenco guitars, but there is no reason for this to be so, and quite a number of professionals and amateurs are turning to cypress for the back and sides of their classical guitars. In Torres’ time there was no division between classical and flamenco – cypress was in great supply, and therefore cheap, while rosewood had to be imported.

In Spain, cypress was used to make coffins, and the cypress tree could often be found in graveyards. Hence, it has an association with death – but, believe me, death never smelled so sweet! The aroma of cypress is beautiful, and doesn’t seem to to dissipate.

Here’s a link to this guitar on Simon’s website: http://ambridgeguitars.co.uk/other-guitars/

This beautiful guitar belongs to Edinburgh University’s Collection of Historical Musical Instruments. I was asked to record a brief sound file for visitors to the museum to hear on headphones as they looked at the instrument.

It was this brief encounter which at a stroke rekindled my love of the classical guitar from the Tárrega to early Segovia period – the repertoire and the instruments.

The guitar has pegs rather than machines for tuning, signifying it was one of Manuel Ramirez’s cheaper instruments. That said, the cypress is beautiful, with over 100 years of maturation. At the recording session, it was strung in Aquila Ambra 900. Here is the sound file I recorded, a shortened version of Lágrima by Tárrega:

Stephen Faulke is an American luthier, now living in Japan, and is a flamenco-guitar specialist. Here’s his website: http://stephenfaulkguitars.com

Stephen heard that I was interested in the early flamenco guitars by Torres, Manuel Ramirez, and Santos Hernandez, and offered to make me a “guitar of Hinoki Cypress, with a spruce top. Carried off in a style of appointment and finish that is craftsman like, but not flashy; in the spirit of the Torres and Santos Hernadez guitars built for working musicians.” 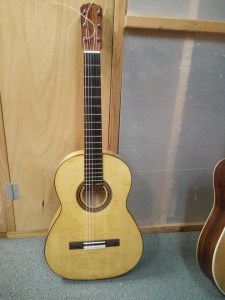 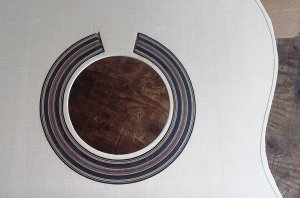 Currently, the guitar is on its way to me from Japan…looking forward to playing it!

Here is Stephen’s “Hot Off The Bench” video:

Here is the top-of-the-range guitar from the Juan Hernandez company of Valencia, this particular one bearing the signature of Alberto Hernandez.

Surprising for me, it has a lattice-construction soundboard, something I’ve never liked. But they have managed to combine the advantages of lattice bracing (mainly volume) with a traditional Spanish sound aesthetic. The result is a loud-sounding traditional Spanish classical guitar.

I set it up with gut trebles from Damian Dlugolecki, and the Seta silk-core basses from Aquila. Judge for yourself:

Here it is with modern strings – Savarez White Card – at 440 pitch. I think a flesh technique can soften the contours of lattice guitars. In fact, I think they are a good partnership.